The Different Types of Groynes 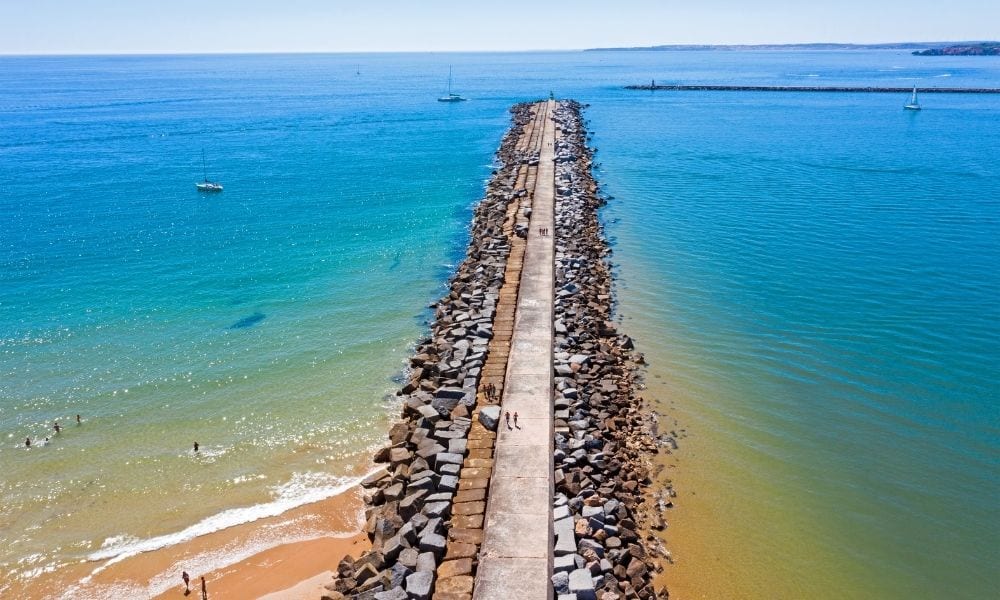 Groynes are human-made structures that protrude perpendicularly from coastal shorelines. Their purpose is to disrupt the natural flow of water and prevent sediment from moving away from the area. Put more simply: they serve to limit erosion. Engineers may design them to act alone or together with other protective structures, such as retaining walls, which provide a defense against head-on water movements. Groynes also exist in manifold forms because several materials and design approaches can prove effective in diverse environments. We’ll explain the advantages of groynes and the different types of available that you’ll need to know to limit erosion in any given project.

Stone groynes are among some of the more straightforward groynes to build because separate, irregularly-shaped rocks in a rough formation comprise them. This means that it is possible for builders to source the stone materials from the leftovers of other construction projects since it does not need a pristine appearance nor components with precise dimensions. Due to the fact that the rocks have spaces between them, stone groynes are highly capable of soaking up the strength of waves, as they take in and disperse the force in addition to blocking it outright.

Should the needs of the coastline shift over time, it is also relatively easy to dismantle these groynes and reconstruct them in new positions. Additionally, rocks in and of themselves are desirable materials for erosion protection applications because they remain firm while in constant contact with water. The downside of stone groynes is that those same gaps that make them so effective can also allow for some sediment to pass through.

Concrete is a common material for groynes because of its impressive resilience. Concrete groynes will remain largely unchanged for extended periods and can include reinforcements to make it even more solid. These come in the form of steel bars that exist as a sort of internal skeleton around which the concrete solidifies. The steel takes on a sizeable amount of the stresses that the concrete faces, which keeps the concrete from cracking as readily or otherwise breaking down in the face of waves.

Since professionals usually prefabricate concrete groynes’ parts and then assemble them at the shoreline site, these groynes have a smoother and neater appearance than some of the alternatives on this list. The main issue with concrete, however, is that it is heavy. As such, concrete groynes are only feasible in areas with the proper ground to support the weight of their foundations and their main bodies.

Wooden groynes’ chief appeal is that they are smaller and more affordable to erect than many other groyne types. You may choose to go with either a one-row or two-row design with them. The one-row wooden groynes allow for some water to pass through, which can be beneficial if you’re concerned about the uneven accumulation of sediment between their two sides. Without some degree of penetrability, the side facing oncoming waves will collect sediment while the side that the groyne blocks off experiences more erosion. If you decide to make a two-row wooden groyne, you can expect that it will be sturdier and allow far less water to move through it. Either way, though, wooden groynes don’t have much longevity and are prone to decomposing from the water and the substances dissolved in it.

A potential solution to this would be to use plastic wood instead of regular wood. You can handle and cut plastic wood in the same way as normal wood, but it will not rot or discolor, offering a strong advantage to groynes unforeseen in other materials. Moreover, plastic wood can include fiberglass reinforcements that make it tougher than regular wood.

Steel groynes may come in various appearances because you can construct them from contiguous sheet piling or use standalone piles that resemble those of wooden groynes. Because they generally don’t have gaps, they don’t let any water or sediment pass along their length. While steel seems like a strong material, it is rather fragile in aqueous environments. The small sand particles that move around a groyne can wear steel down quickly, and the water and the solutes that it contains cause rusting and decay.

Steel’s vulnerabilities make it inapt for groyne composition in most cases. It is usually much more effective as a reinforcement for concrete since the two materials cover each other’s weaknesses. The concrete removes direct water contact from the steel, while the steel makes the concrete more hard-wearing, as stated above.

Similar to stone groynes, rubble-mound groynes are composed of loose, uneven pieces that builders bring together. However, their components can be a mixture of concrete and stone rubble, along with steel sheet piling. The concrete and rocks cover the steel to form a mutually beneficial relationship in the same vein as reinforced concrete groynes.

Furthermore, rubble-mound groynes are larger and wider when compared to wooden or steel groynes. This imparts rubble-mound groynes with great robustness. Their design also allows them to absorb the impacts of waves efficiently. In terms of appearances, their rugged nature allows for fewer maintenance needs, as they are already somewhat amorphous. Rubble-mound groynes’ strengths make them a common choice for people looking for a solution to sediment movement.

Using sandbags to make groynes is a temporary measure for stopping shoreline erosion. Unlike the other different types of groynes, you shouldn’t expect sandbag groynes to remain fully functional for more than about five years, at the most. They work as impermeable physical barriers that will stop water and sediment, though you do need to make some considerations for them to be effective.

For one thing, the end of the groyne that is furthest from the land should have extra reinforcement to stand up to impacts. You must also think about the size and weight of each individual bag. Too light and they will readily become damaged or move when waves hit them. A good rule of thumb to follow with them is to choose bags that are more than fifty kilograms. Ultimately, sandbag groynes are not the best at dispersing wave energy, and they will break down quickly, leaving unattractive pieces of cloth and lumps of sand behind.

If you need to construct a sturdy groyne that will do its job well, and stand for a long time, consider using plastic wood from Tangent. We have developed marine-grade lumber specifically for these kinds of applications.